Established by an act of the Township Committee in 1942, the Police Department consisted of a Chief (the late Otto Kengetter) and Special Officers who performed police duties only when needed.

The Department functioned with only one patrol car, which was not equipped with either a radio or any emergency equipment.   The Special Officer operating the car would have to use a private phone to call headquarters to obtain any emergency calls.

The first police headquarters was located on Shoreland Circle behind what is now the Laurence Harbor Library.  However, it was too limited.  There were no holding cells at the headquarters and when prisoners had to be held overnight they were taken to the old South Amboy Police Department and held there.  Even municipal court hearings were held in cramped makeshift quarters - the basement of the magistrate's home. For many years, Judge Maxwell Mayer held all court hearings in his home on Shoreland Circle in Laurence Harbor, around the corner from the police station.

Things began to improve in 1948 when police headquarters was moved across the street into the building that now houses the Laurence Harbor branch of the public library.  This building was outfitted with two holding cells, but there was little or no police equipment and police officers received no formal training.  They became acquainted with their job through association, trial and error.  In addition, the pay was low and each officer had to supply all his own equipment and uniforms.

Four years later, the post-war population boom and the improvement of several highways led to the installation of a state teletype receiver system and the Township's lone patrol car was equipped with a police radio that connected to the Monmouth County Police radio system.  This enabled citizens of the Township to call the police number and receive aid within minutes as the Monmouth County radio relayed the citizen's message to the patrol car.

By 1956, Chief Kengetter retired and was replaced by Ptl. Edward Adler, one of nine full-time officers.  During that year, all new officers were sent to the State Police Training Academy in Sea Girt, NJ.  Experienced men were given the opportunity of attending in-service schools conducted by county, state, and federal law enforcement agencies.

By 1956, three more officers were added to the department, increasing the force to 12.  One of the 12, Detective Sergeant Charles W. Boice, was assigned to handle all criminal investigations. The year also saw the installation of the department's first police radio system that included a base station and two radios in the department's three patrol cars.  Four special officers were employed on a full-time basis to operate the system, giving the Township around the clock patrol for the first time.

The next year, 1957, the Patrolman's Benevolent Association was formed and became P.B.A. Local 127.

In 1960, the department's workload outgrew its Laurence Harbor headquarters and a new headquarters was established at Routes 9 & 34.

In 1961, the department underwent its second change in command in six years when Chief Adler resigned. Detective Sergeant Boice was named to replace Chief Adler and held the position for twelve years.

As the Township continued to grow through the early 1960's, so did the Police Department.  To accommodate the tremendous growth throughout the Township, the department divided the Township into three patrol areas and maintained a 24-hour patrol in each area.

In 1964, Chief Boice divided the department into four divisions:  Administration, Uniform, Detective Bureau and Traffic & Safety Division.   Each division was assigned an officer-in-charge and duties were outlined in division Rules and Regulations.

A fifth division was added in 1972, when the department was able to obtain a state grant for an Accident Investigation Squad. The creation of this division enabled the patrol division more free time to cover all emergency calls.

In 1978, the Police Department moved to its current location at the corner of Rt. 516 and Cottrell Road, where it carries out the Law Enforcement Mission.

Today's Police Department is a far cry from 1942 when the department was limited to arrests of disorderly persons and occasional traffic violators. However, while times have changed and the Township population has increased from 5,000 to over 65,000, the mission of the Police Department remains the same -- to protect and serve the citizens of Old Bridge Township. 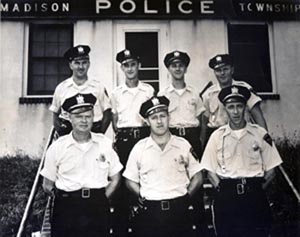